Absolutely delicious, homemade, vegan Ferrero Rocher truffles with chocolate and hazelnuts. You will definitely need more than one! Oh hey there! Remember me? I feel like it's been years since I've posted a recipe (or anything, for that matter) over here! But as you may remember from my last post, we went on holiday, so I have a pretty good excuse...

Because it's been so long (spiderwebs, tumbleweeds and dust everywhere!), I thought I will treat you to something special today. So... here I am, with these delicious, reach, and creamy truffles, which are also happen to be 100% plant based. If that's not a special treat, then I don't know what is!

And just to be clear, I have called them Vegan Ferrero Rocher because they look and taste almost like a real deal! Because there is no thin wafer layer, I've used word 'almost' rather than 'exactly'. Although, I'm aware that some of the most devoted fans of this famous chocolate and hazelnut treat, may not find it appropriate for me to use that term... As they say... you can't please them all! I've made these vegan Ferrero Rocher's just before we went on our holiday, and strangely enough, just as I was about to share a picture of them on my Instagram page , couple of other bloggers shared almost exact same picture of almost exact thing. Now, you may wonder, why the hell am I telling you this, right? Well, hear me out...

When I started my journey with food photography and blogging, I would spend ages looking through a beautiful galleries and websites, searching for some recipes and inspiration. Quite often, I wouldn't dare to make something, that other blogger/ fellow cook/ foodie made for their website, out of fear. Fear of being accused of copying someone, or even worse, stealing their ideas (which actually happened to me in the past, and it was an awful experience). Now, I'm obviously not going to advise you to go and just copy someone's else work and content, because that is just eeeek and a BIG no-no.

What I'm trying to say, is that it's OK to be inspired by someone else. It's OK to try to recreate someone else recipe, picture or idea. As long as you include and mention the relevant credits, as long as you admit that your work, or particular picture or idea has been born thank to 'xyz' , it's OK to use it or even re-create it. It's also absolutely possible, that two (or even more) people, had almost exactly same idea in the same time. It's not unusual for me, to take picture of something, just to discover someone on Instagram has shared almost exact same idea, 10 seconds before I did.

At the end of the day, we are all inspired by something or someone, when it comes to our work. Is it really possible to come up with the recipe, that has never, ever ever been created by someone before? Aren't all the recipes/ ideas born as a result of something, that someone else did before us?

I remember listening to this podcast ages ago, where the host was debating over copy rights for the recipes. The conclusion- there is no such thing. Reason being is that pretty much every recipe is based on some other recipe, and so on, and so on... He compared it to music composers. All of the great music composers based their music notes on someone's else, who composed before them. Yes, you are creating your own thing, and you probably don't know it yet, but you are doing it as a result of hearing it somewhere else before... And as mentioned above, as long as you give the relevant credits, where they are due, and as long as you don't just blindly copy someone's work word by word, and as long as you admit that you have been inspired by so and so, there is no shame in re-creating something, that has been done before. What's even better, the person who inspired you, or who's recipe you have re-created or based your recipe/ photo/ idea on, will more likely to feel super flattered and over the moon, when you mention that it's them who you want to thank for it!

As online creatives, we all have certain interests and hobbies and passions. And it goes without saying, that there is more than one person out there, who is interested in food photography, for example. As we have similar interests, we are more likely to be moving in the same circles, looking at similar photos, admiring work of the same creators, being inspired by the same person. As a result, we may create very similar work. And often, it's even without knowing each other. Because it's possible for two creatives, to have the same idea.

So don't get upset or stressed or angry, if you see that someone else posted almost an identical picture to yours. Instead, congratulate them! Tell them that you have also come up with the similar idea. Tell them that you like it, and that you like their take on it. Share your work with them, so they can see what you have come up with, and more likely, they will also congratulate you!

There is a very thin line between stealing and copying ideas, to being inspired by someone. The difference is, to simply be honest and open about it, and tell the world who it is that sparkled that idea in you! I do feel like there is a bit of a stigma in the blogging (especially food blogging) world about it, and I hope that this post will encourage at least some of you, to just go and create whatever it is you fancy.

The recipe for these vegan Ferrero Rocher's is inspired by Rachel from Rawberry Fields, and her Raw Ferrero Rocher recipe, which you can view here. I like to add a bit of maca powder to mine, purely because I do love that earthy, buttery taste of maca, plus it tricks my mind into thinking, that these chocolate truffles are healthy (which, in a way, they are, comparing with the shop- bought version!).

Because the whole mixture of the ingredients tends to melt very quickly, I would highly recommend to work in small batches, and store the rest of it in the fridge, until you are done with the current batch. Once all of your vegan Ferrero Rochers are rolled and coated in roasted hazelnuts, put them in the airtight container, and place back in the fridge (if you can resist demolishing them all straight away!). After about 30 minutes, they will harden a bit more, and will be ready for you. If you do happen to have any left, they will keep well in your fridge for up to 7 days! Have you got any thoughts on today's post? Do you think it's OK to be inspired by someone else work and re-create it? I would love to know what you think and what experience you have on this subject. Let me know in the comments section below! 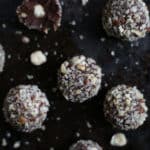 Prevent your screen from going dark

Calories: 199kcal
Have you this recipe yet?Mention @anna_wierzbinska or tag #annabananaco! I love seeing your take on my recipes!