Easy and quick to make, these pretty cupcakes taste just as good as they look, if not better!

Whether you're looking for a little treat to spoil your loved one on Valentine's or an easy bake for an every day celebration, or any time of the year, these raspberry and chocolate cupcakes will be a great choice!

This cupcake recipe is similar to my Lemon and Poppy Seed Cupcakes, but we are infusing the cake batter with raspberry reduction (concentrated raspberry juice). This turns the sponge not only into this beautiful, bright pink colour, but also gives the cupcakes incredible raspberry flavour.

Let's look at the ingredients you will need to make these easy chocolate and raspberry cupcakes:

Optional items include dried raspberries and chocolate hearts, but feel free to use any other decorations of your choice.

Scroll to the bottom of this post for the recipe card and the full list of the ingredients.

Cream the room temperature butter and the sugar until pale and fluffy, about 2-3 minutes. Add eggs, vanilla extract, and raspberry reduction.

Combine the mixture with the dry ingredients and fold until you have smooth, thick batter.

Divide the batter between cupcake cases, filling each case no more than ⅔ full. Bake the cupcakes for 20-25 minutes.

Cool the cupcakes for 5 minutes, then transfer to a cooling rack to cool completely.

Make a hole in the middle of each cupcake and fill it with raspberry jam.

Top each cupcake with chocolate buttercream and add any other decorations of your choice.

Here's a list of an equipment you will need to make this raspberry cupcakes recipe:

Store these chocolate raspberry cupcakes in an airtight container at room temperature for 2-3 days.

Alternatively, you can keep them in an airtight container in the fridge for up to 5 days. Bring the cupcakes to room temperature before serving.

Plain cupcakes (without the raspberry jam filling, or chocolate buttercream) can be frozen for up to 2 months. To freeze, wrap each cake individually in a double layer of clingfilm/ plastic wrap and freeze. Thaw overnight at room temperature.

Chocolate buttercream is also suitable for freezing for up to 2 months. Thaw it in the fridge overnight, then bring to room temperature and re-whip using an electric mixer.

Allow your raspberry cupcakes to cool completely, before adding the jam filling and the chocolate buttercream. If they're still warm, your buttercream will turn into a puddle of mess!

If the cupcakes baked with domed tops, but you want them to be flat, use a small serrated knife, and cut a bit off creating a flatter surface.

After beating your chocolate buttercream, mix it at the end with a spatula. This will help to get rid of air bubbles, and make it look beautifully smooth.

How can I make my own self-raising flour?

To make your own self-raising flour from the plain, all purpose flour, use the following formula: add 2 teaspoon of baking powder to each 150g of plain flour, and sift together until they are evenly combined. You can also add ¼ teaspoon of baking soda, but only if the recipe you're making has cocoa powder, buttermilk or yoghurt in it.

I don't have any cupcake liners, can I make my own?

Absolutely! Grab a glass that fits snugly into your cupcake baking tin. Cut squares from the baking paper (roughly about 15cm big), then press the square of baking parchment around the bottom of the glass to shape it to a size that fits in the tin.

To pin this recipe and save it for later, use the button on the recipe card or on the photos above.

If you try this recipe, or any other recipe on Anna Banana, please take a moment to rate the recipe and/ or leave me a comment. I love hearing from you, but it also helps other readers who are thinking of making the recipe. 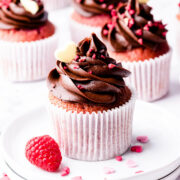 For the raspberry cupcakes:

For the chocolate buttercream: