These homemade French cruller doughnuts are incredibly moreish and surprisingly easy to make! Delicate, light and airy in texture, and golden-brown and crispy on the outside. Serve them dipped in some simple glaze, along with a cup of coffee for utterly delicious treat, that is simply impossible to resist!

They are made with choux pastry, which is then piped into rings and deep fried or baked. You can try them with lots of different glaze variations, or perhaps with a filling of custard, pastry cream or your favourite curd!

What I love most about french crullers, is that they are much easier and quicker to make than traditional doughnuts. Unlike my popular Small Batch Doughnuts recipe, or my Pumpkin Spice Doughnuts recipe, these guys do not require any yeast or proving times.

Choux pastry can be made in advance and stored in the fridge, allowing you to enjoy freshly made, melt-in-your-mouth crullers for breakfast!

French cruller donut is a doughnut made with choux pastry, also known as pâte à choux. As you may know, it's the same type of dough that is used to make profiteroles or eclairs. It is cooked twice: first over the stove/ hob, then oven baked, or deep fried in this case.

Crullers (sometimes also called chouxnuts), are much lighter and more delicate than the traditional doughnuts. Choux pastry dough rises and becomes incredibly airy when fried, which is why these doughnuts have such delicate and light texture.

They should be crispy on the outside, with the distinctive edges that are just perfect for absorbing the sweet glaze, and super soft and airy inside.

Only few simple and very basic ingredients are needed to make these chouxnuts. Here's what you will need:

Scroll down to the bottom of this post for the recipe card and full list of the ingredients.

Watch this Instagram Reel to see me making these cruller doughnuts!

Making choux pastry is actually really easy and straightforward. Start by placing the milk, butter, sugar, salt and 120 ml of water in a medium saucepan over a low heat, stirring until sugar dissolves and the butter melts.

Bring this mixture to a gentle boil, then remove it from the heat. Tip all of the flour into this mixture and using a wooden spoon, stir it vigorously, until well combined, then return to a low heat and cook, stirring it constantly for 2 minutes.

Transfer the dough into a bowl of a standing mixer, and spread it into a thin layer over the sides and the bottom of the bowl. Leave it to cool for 10-15 minutes.

Scrape the sides of the bowl, and add 2 beaten eggs into the dough and mix it on medium speed until the eggs are fully incorporated. Add the remaining beaten egg and repeat.

Gradually, add the remaining egg white until the mixture is thick and shiny and drops off a spoon when tapped lightly (you may not need all of the egg white). If it clings, add a little more egg whites, 1 teaspoon at a time to get the right consistency.

Scoop the choux paste into a large piping bag fitted with large open star nozzle (or large French star nozzle) and place it in the fridge for at least an hour.

While the dough for your homemade crullers is chilling, cut the baking paper into 12 squares, 9cm x 9cm. Next, draw a circle 7cm in diameter on each of the paper squares, and turn them into other side, so the circle is at the back of the paper.

Half fill a deep-fat fryer or large heavy-based saucepan with vegetable oil and place it over a medium heat. Heat the oil until it reaches 180°C on the cooking thermometer.

Pipe a circle of dough onto each square, making sure you connect the ends of each donut.

Hint: Dip the tip of your finger in some water, then gently tap the apex or any end points on your cruller doughnuts. This way, you will avoid burning them.

Please take extra care when frying these chouxnuts. The oil will be VERY HOT, so it is important to be extra-careful.

Once the oil temperature reaches 180°C, carefully lower the choux rings into the oil, with the baking paper uppermost. Alternatively, place a square with a cruller on it on a slotted spoon and slowly lower it into the oil.

Gently remove the baking paper using metal tongs and fry the cruller doughnuts for 2-3 minutes on each side, until golden brown. Make sure to only fry 2-3 doughnuts at a time.

Hint: Use wooden skewer or a metal utensil for flipping the doughnuts onto other side while frying. Avoid any type of plastic utensils as they will melt in the hot oil.

Use a slotted spoon to remove the cooked cruller donuts from the oil and set them aside on a wire cool rack or large plate lined with kitchen paper. Repeat the frying process with all the remaining doughnut rings.

Once the crullers are cool enough to handle, dip each choux ring into the glaze and return to the cooling rack, dipped side uppermost.

If you are not a fan of deep-frying these crullers, you can also bake them instead. The texture of the baked crullers will be slightly different than that of the deep-fried ones.

The crust of the baked cruller donut is firmer. Due to more moisture evaporating from the dough in the oven, the interior of baked cruller is less gooey and less squidgy and more sturdy in comparison. That said, they still taste DELICIOUS!

Hint: Follow the instructions in the recipe card notes for baked crullers.

Chouxnuts can also be made in the air fryer. I have not tried the air-fried version of them, but if it's something you would like to try, check out this Air Fryer Pumpkin Spiced Crullers recipe from Recipes From a Pantry website.

Here is the list of the kitchen equipment needed to make this recipe:

Crullers can be enjoyed plain, with glaze, or even with a filling. Here are few suggestions you may want to try:

Crullers are best and should be eaten on the day they are made. You can store any leftovers in airtight container up to 2 days.

You can also freeze piped, un-fried crullers for up to a month. Place the squares with piped choux rings on a baking sheet and freeze until frozen. Transfer them to freezer-friendly bag or container. Let them thaw slightly while the oil is heating up, before proceeding with frying, as per the recipe card. You will need to add a minute or two to frying time.

Can I use small piping tip/ nozzle to pipe the crullers?

Yes and no. Technically, you can use small piping nozzle, but your crullers will be much smaller and thinner. If you want to get the proper-sized, large cruller doughnut, you will have to use large tip to pipe them. Using a small nozzle will also make piping the doughnut rings more difficult.

How do I know when they are cooked all the way through?

You know your crullers are done when they are deep golden brown in colour on both sides. They only need 2-3 minutes of frying on each side.

Why did my doughnuts collapsed after frying?

There could be a couple of reasons for this. One is the type of flour used. I found that making the dough with strong bread flour makes much sturdier doughnuts, in comparison to plain flour. Another reason for that could be that your crullers were not cooked all the way through and needed more time to be fried.

Why did my crullers split while frying?

It is more likely due to the choux pastry has not been chilled enough. Remember to allow the dough to sit in the fridge for at least an hour or two, before piping and frying the doughnuts. Also, make sure that your frying pan is half filled with oil. Any less, and you are risking the crullers getting stuck to the bottom of the pan and splitting as a result. Lastly, make sure the oil temperature is spot on and stays right at all times.

I found that using the strong white bread flour to make choux pastry with makes sturdier dough, which is less likely to collapse after frying.

Chilling the choux pastry helps these French cruller doughnuts to keep their shape while frying. It also makes the dough less sticky and much easier to handle.

If you try this recipe, or any other recipe on Anna Banana, please take a moment to rate the recipe and/ or leave me a comment. I love hearing from you, but it also helps other readers who are thinking of making the recipe.

To pin this recipe and save it for later, use the button on the recipe card, or on any of the photos above. 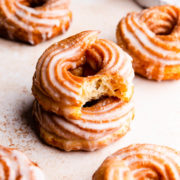 This recipe was originally published in June 2019. It has been updated with the new photos, revised recipe and tips in January 2022.