Utterly delicious pumpkin cinnamon rolls with maple cream cheese icing! Ideal bake for a rainy weekend, but be warned- you will not stop at one! I hope you still remember me? It feels like years since I've showed up over here (OK, a month to be precise, which is like a year in blogging world), but I'm back and ready to share all the cozy, autumnal recipes with you! Let's begin with...

These beautiful buns will very quickly become your favourite autumnal bake, trust me! They are soft, squidgy and airy- a perfect combination for an ideal bun. Buttery sweet, with warming notes of cinnamon and generous topping of cream cheese icing. There is no better treat for the rainy weekend!!! Make the most of pumpkin season...

We all know that October is dominated by gourds, and rightly so! Gorgeous squashes and pumpkins are popping up everywhere and it's a great time to put them into some great use in the kitchen. I was genuinely shocked to read that 30% of people think pumpkin flesh cannot be eaten (according to Pumpkin Rescue campaign), which partially explains why over 18,000 tonnes of edible pumpkin ends up in the bin! Crazy, right?!?

So, just in case if you are not sure what to do with all the pumpkin flesh, this recipe will be a great starting point! Simply cut your pumpkin or squash into wedges (no need to peel!), place them on the roasting tin, drizzle with some oil and roast in the oven (180C)  for about 30- 40 minutes until soft and caramelised around the edges. Once cooked, the skin can be easily peeled. Simply mash the remaining flesh, and you are good to use it in sweet, as well as savoury dishes! There is nothing difficult about this recipe for pumpkin cinnamon rolls, but if I have to find a tricky part- it will the be kneading of the dough. The mixture can get really sticky, therefore, I would highly recommend using freestanding mixer. Simply tip all the ingredients and let the mixer do its job. That said, if you don't own a freestanding mixer, do not let it discourage you! Just be patient with kneading the dough (or let your other half do this part for you!), and it will eventually come together. It may take 15- 20 minutes, but I promise it will be worth it! How to roll pumpkin cinnamon rolls?

Once your dough is proofed, tip it onto the working surface dusted with some flour. Shape it into a rectangle, then using your rolling pin, roll it to about 30cm x 40cm size. Start spreading your cinnamon butter all over the dough, covering all the edges, then roll from one of the longer sides to make sausage-like shape. For the next part, you will need a really sharp knife, or (my preferred method) unflavoured dental floss. Divide and cut your log into 12 equal pieces, arrange in baking tray and leave to rise for further 30 mins. All that's left after that is to bake! After baking, these pumpkin cinnamon rolls are pretty much ready to eat, however, if you want to make them even tastier- add this simple maple cream cheese icing on top! Be as generous with the icing as you like, using the rule of thumb- the more icing, the better rolls! Enjoy watching the rolls disappear... I hope you've enjoyed today's recipe, and as always, I would love to hear from you! Feel free to leave me a comment below, and remember to sign up to my newsletter so you can get all the latest recipes and news straight to your inbox! 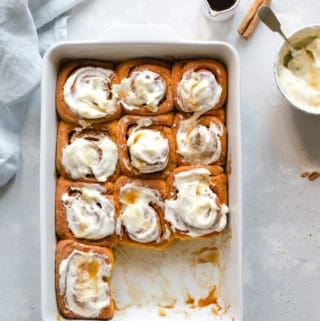