The smoothest vegan chocolate pudding you've ever had! This little treat is rich, decadent, velvety-smooth and simply out-of-this-world good!

I' m well behind with stuff this week, including posting this recipe! Seems that the last few days have been just a series of unfortunate events, but I can now see the light at the end of this tunnel!

If you never had vegan chocolate pudding before, you are up for such a treat today! This is, without a doubt, one of the best puds I've ever made! It is another recipe inspired by Alanna's blog The Bojon Gourmet (I'm just SO in love with her stuff at the moment! See this recipe as a proof!)

It's a very rich, decadent and oh-so-smooth dessert. With silky, velvety- like texture, and sweet, chocolatey flavour with added hints of coffee liquor (optional). I love mixing coffee flavours with chocolate, because they compliment each other so well in my opinion. It almost 'lifts' the chocolate and takes it to the next level, soooo YUM!

What do I need to make vegan chocolate pudding?

There are so many versions of vegan chocolate puddings available online. I have tried and tested many of them in the past. But there wasn't anything that came even close to this one! And yes, it's a quite bold statement, but I will stand by it. Nothing out there delivers so much joy to my taste buds as this silky-smooth treat. Let's look at the ingredients...

The rest of the ingredients are quite straight forward. We've got an almond milk (or any other milk of choice), organic cocoa powder, cornflour, vanilla, coffee liquor (I used Kahlua), sea salt and coconut cream to finish.

It's worth adding that coffee liquor is optional and not necessary. Same goes for the coconut cream, but it is a nice addition to the finished dessert and adds an extra flavour and texture. You can also use any selection of favourite toppings, like crushed nuts, chocolate shavings, or sprinkles (I have opted for puffed quinoa and choc shavings with crushed hazelnuts).

How to make vegan chocolate pudding?

Start with preparing 6-8 small glasses or ramekins. The pudding is very rich and decadent, so a little goes a long way! You don't need to fill the glasses/ ramekins up to the brim, but feel free if you wish to!

In a small bowl or a cup, mix the cornflour with some of the almond milk until it has completely dissolved. Place the cocoa, sea salt, milk and condensed coconut milk in a medium saucepan over a medium heat and stir it using a wooden spoon or silicone whisk until well combined. Pour in the cornflour and milk mixture and keep stirring constantly, until you bring this mixture to the gentle boil. It will take about 10 minutes.

After that, take it off the heat, add dark chocolate, Kahlua and vanilla and stir again until all ingredients are combined together and all the chocolate has melted. Keep stirring the mixture until it cools down a bit.

After the pudding has cooled down to room temperature, pour it into prepared glasses/ ramekins. Cover the top of each glass with some cling film or kitchen foil (to avoid 'skin' forming on top) and place in the fridge for at least couple of hours. The puddings will firm up more during the chilling time. when you are ready to eat them, top them up with some whipped coconut cream and your favourite toppings. YUMMO!

One last thing worth mentioning... Alanna recommends to transfer the mixture into a mixing bowl of a standing mixer and beat it on a low speed until it has cooled down to room temperature. This will give the pudding even silkier, more velvety-smooth texture. However, you can skip this step and just stir your pudding by hand, as mentioned above, until it has cooled down a bit, before transferring it into pots.

What can go wrong?

It's a very straight-forward recipe, however, sometimes the pudding can get lumpy...If you notice, before transferring the pud into individual glasses, any sort of lumps in your mixture, don't panic just yet! It happened to me a couple of times, and I have found the simple way to get rid of them. Simply use a fine sieve to run the mixture through over a large bowl. The sieve should catch and stop any of the lumps going in. 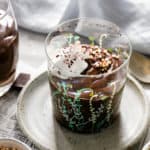 Prevent your screen from going dark

The pudding is very reach, therefore a little goes a long way! No need to fill in the glasses/ ramekins up to the brim! * You may get more or less serving portions, depending on how big you want them to be. * You can transfer the mixture into the mixing bowl of a standing mixer and beat it on low until it cools down to room temperature. This will give your chocolate puddings even silkier and smoother texture! *If any lumps appear in your mixture, use a fine sieve to run it through. The sieve will catch and stop all the lumps going in!
Have you this recipe yet?Mention @anna_wierzbinska or tag #annabananaco! I love seeing your take on my recipes!