This twisted cinnamon and hazelnut bread is made with incredibly soft and fluffy dough, filled with fragrant cinnamon butter and toasted hazelnuts. The finished knot is dusted with some icing sugar, making it a perfect centrepiece at any festive table!

Why this recipe works

Since my Twisted Cinnamon Buns have been such a hit with you guys, I've decided to make an adaptation of that recipe, but on a larger scale.

Imagine soft, fluffy and super moreish dough with fragrant cinnamon butter and toasted hazelnuts, shaped into very impressive, but easy to make knot. That's exactly what you will get with this recipe.

This twisted cinnamon bread puffs up wonderfully and tall, and is super soft all the way through. It has tender and airy texture, that just melts in your mouth with each bite.

The dough is based on my trusted and tested recipe, which you guys seem to be loving too. The filling of sweet and fragrant cinnamon butter goes wonderfully well with toasted, crunchy hazelnuts.

Last, but not least, this is actually a really easy recipe. It requires a little bit of effort, but the recipe and the technique is very easy and fun to make.

How to roll and shape the dough for twisted cinnamon bread

Once your dough have doubled in size, you are ready to roll. Transfer it into a lightly floured surface and gently press the air out of it. Use your hands to shape it into a small, rough rectangle.

Now, start rolling it into a large rectangle, using rolling pin. You don't have to be super precise here, you are aiming for roughly 35 x 50 cm rectangle. It's OK if it's a bit smaller or a bit larger than that, so don't stress over the size of it too much.

Next step is optional, but I HIGHLY recommend adding it into the preparation of your twisted cinnamon bread. Once the log is rolled, transfer it into a large baking tray/ sheet lined with some baking paper and put it in the fridge for an hour.

This will help the dough and the butter to firm up, making it much easier to twist and shape later.

Remove the dough from the fridge, and place it onto a lightly dusted surface. Use a very sharp knife to slice your log in half, lengthways, but leave a small section at one end in tact.

All that's left is to cross each half in a simple twisting pattern, all the way down. Cross both ends of the twist together, and tuck the ends underneath. Transfer into the round baking tin, cover and allow it to prove for another 45 minutes to 1 hour.

Why to toast the hazelnuts

Before you start chopping your hazelnuts, make sure to toast them. Not only it brings out and intensifies that lovely, nutty flavour, but it also adds an extra crunch to them. Extra step that is 100% worth taking, I promise!

You can use blanched hazelnuts, or the ones that still have the skin on. Once they're toasted, most of the skin will come off. I personally don't mind the skins, but some people find their taste too bitter, so do whatever suits you.

Simply add the nuts into a hot, clean frying pan over the medium-high heat. Allow them to fry for couple of minutes, until fragrant and darker in appearance. Remove them from the pan onto a clean kitchen towel. Roll them into the towel to remove any excess skins and chop.

Can this bread be made ahead?

You can make this twisted cinnamon bread on the day, or a day ahead. If making it on the same day, simply allow it to prove as per the instructions in the recipe card.

If you want to make it ahead, prepare the bread up to step 9. Cover it and keep it in the fridge overnight. When you are ready to bake it the next morning, take it out of the fridge and allow it to rest at room temperature for about 30 minutes. Brush it with egg wash and bake in the oven as per the instructions in step 9.

How to store twisted cinnamon bread

This bread tastes best when it's still fresh and warm. With any leftovers, cover it with some plastic wrap or clingfilm and store it at room temperature for up to 2 days.

It will become dry after that time, but it will still taste delicious, especially with a warm cup of tea or coffee. It can also be used to make THE BEST French toast ever, just saying...

As always, thanks for tuning in to today's post. If you try this, or any other of my recipes, I would LOVE to hear your feedback! 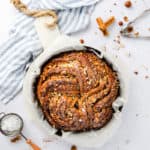